The study – conducted among 1,200 respondents in 12 cities across the UK, France, Germany, Belgium and the Netherlands – revealed that by 2025, a third (32%) of 18-24 year olds expect to be using self-driving cars, four in ten (41%) say they won’t be using cash to pay for transport and half (51%) believe transport provision will be a key consideration when deciding where to live and work.

The findings also revealed that the age group – dubbed the ‘Future Commuters’ – are already practising what they preach when it comes to travelling around their city.

Three in five (63%) use their smartphone or tablet as the primary device for planning journeys and receiving travel information, around four in ten are already using cashless payment methods (including contactless and apps), and around a third of app users do so to get timetable (37%) and traffic updates (29%) and book journeys (30%) – making them the ‘smartest’ of any age group.

“As these ‘Future Commuters’ begin travelling within our cities they bring with them high expectations of Europe’s transport system,” said Richard Harris, director, communications and marketing, International Public Sector, Xerox. “Public transport provision and infrastructure must smarten up, incorporating digital services like integrated apps and cashless payment as standard, if the industry is to live up to the predictions revealed here.”

How are Europe’s cities faring?

Further findings revealed that Generation Z aren’t the only ones leading the way when it comes to practicing smart transport habits in Europe.

In a comparison of cities, Paris emerged as the ‘smartest’ with almost half (47%) of respondents there using smartphones and tablets as their primary travel-planning device – compared to a 33% European average. London and Frankfurt (44%, 38%) saw similar behaviour, although Berlin (21%) lagged behind.

When looking ahead to 2025, the study also revealed differing country opinions toward achieving a smarter transport future.

Almost half (49%) of those in Belgium and the Netherlands expect to have cashless transport by 2025, on average 35% of French respondents anticipate using electric or self-driving cars within ten years’ time, while respondents in the UK, Germany and Belgium (all 35%) were in agreement that public transport provision would become a deciding factor in their choice of where to live and work.

“Europe’s transport system is incredibly varied, so a degree of complexity is to be expected,” Harris said. “It’s the job of today’s transport operators, city planners and infrastructure providers to break down this complexity and make public transportation an easy, reliable and intelligent experience for those that use it.

“Integrating services through smart, ‘Mobility as a Service’ (MaaS) solutions puts users at the heart of the transport network, offering tailor-made travel services based on preferences. These services also provide the means to achieve the smarter, simplified transportation landscape envisioned and expected by future users,” he said.

The full report – ‘Keeping Our Cities Moving: The European Urban Transportation Survey’– with further findings from the study, detailing transport behaviours, preferences and parking habits across Europe, can be found here.

About the Research
The research was conducted by TNS on behalf of Xerox between October 5th and 26th, 2015 using its propriety online panels. The study questioned 1,200 respondents (aged 18+) in 12 cities across the UK (London, Birmingham, and Edinburgh), France (Paris, Lyon, and Marseilles), Germany (Berlin, Hamburg and Frankfurt), Belgium (Brussels) and the Netherlands (Amsterdam and Rotterdam).

By 2020, Half of Citizens Believe They Will Use Only One Transportation App and More Than a Quarter Will Use a Self-Driving Car 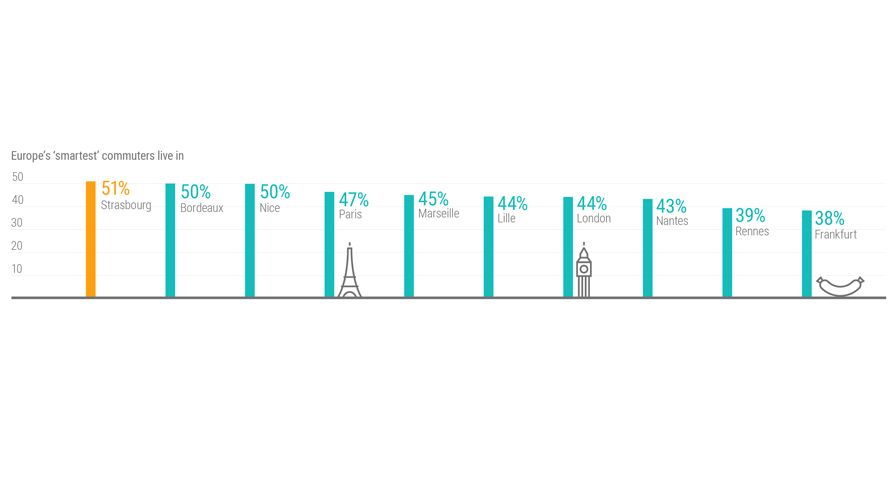