UXBRIDGE, U.K., May 22 2013 – As the U.K. economy begins to return to modest growth, a new report finds manufacturers that incorporate useful services with their existing products are realising business growth of 5 to 10 per cent a year. This is the chief finding from a 12-month research project carried out with nearly 30 British manufacturers and their customers1 by Xerox and Aston University.

Dubbed a “services goldmine” the study explains ‘servitization’, the concept of adding technology-led services to manufacturing, and its potential to represent 50 per cent of a company’s revenues.

However, despite the cost savings displayed by participants in the report, the study finds that servitization has failed to generate widespread awareness in the wider U.K. market.

The ‘Servitization Impact Study’ finds that servitization also reduces costs of up to 30 per cent for manufacturing customers by helping them to simplify business operations and streamline labour-intensive processes.

But with only 30 per cent2 of UK companies offering services on top of products, the report concludes that manufacturing and service are still largely thought of as separate, self-contained sectors, and that a huge opportunity exists to promote more manufacturers to compete through services.

“The distinctions drawn between manufacturing and services are artificial and unhelpful, when in truth the two are already coming together in a way that is re-shaping the future of U.K. manufacturing,” said Tim Baines, Professor of operations strategy at Aston University.

Examples of servitization range from the provision of spare parts to product maintenance, repair and overhaul. Rolls-Royce’s TotalCare, for example, offers total maintenance and repair of the engines it sells to airline operators, while monitoring performance and suggesting improvements throughout the product lifecycle.

Executives interviewed for the study see potential for both regional and macro-economic benefits in the future. “Our work with Aston University and Professor Baines in recent years has revealed huge potential for our economy but it will take a shift in mind-set, organisational structures and operations before the promise of servitization can be truly realised,” said Alan Charnley, managing director of Xerox U.K. and Ireland. “Industrial operation is becoming increasingly sophisticated and services are a huge way to make that innovation count.”

The qualitative study revealed several perceived barriers to the adoption of servitization, including a purported lack of skills and concerns around processes, budgets, legislation and contracts. The report therefore calls for businesses and policy-makers to encourage the skills, contracting structures, risk management mechanisms and financing systems that will allow companies to deliver services while building their capabilities to innovate technology along the way.

The full report; ‘Servitization Impact Study: How U.K. based manufacturing organisations are transforming themselves to compete through services’ can be downloaded here.

Aston University began as the Birmingham Municipal Technical School in 1895, evolving into the UK’s first elite College of Advanced Technology in 1956. Aston University’s Royal Charter from Queen Elizabeth II was formally sealed in April 1966. Aston Business School is renowned for the quality of its teaching, research, strong business links and a supportive environment. The School provides students with an inspirational educational experience offering them rapid career progression in international business.

Since the invention of Xerography 75 years ago, the people of Xerox have helped businesses simplify the way work gets done. Today, we are the global leader in business process and document management, helping people be more efficient so they can focus on their real business. Headquartered in Norwalk, Conn., United States, more than 140,000 Xerox employees serve clients in 160 countries, providing business services, printing equipment and software for commercial and government organisations. Learn more at www.xerox.com.

Xerox Europe has manufacturing and logistics operations in Ireland, the U.K. and the Netherlands, and a research and development facility – Xerox Research Centre Europe – in Grenoble, France.

XEROX®, XEROX and Design® are trademarks of Xerox in the United States and/or other countries.

1From ‘Servitisation and the future of manufacturing: The Power to Help You Succeed’ report by Cambridge University and Barclays, August 2011

2Early adopters of servitization include:

Alstom Train Life Services
When Alstom took over maintenance of West Coast Mainline in 1998, the company was smaller than the East Coast line. Today it is twice the size of East Coast due to the improved standards of rail travel, and passenger numbers have increased from 13million per year to 32 million per year.

Rolls Royce
Rolls-Royce generates 50% of its revenue from services.

Offerings such as TotalCare have supported the creation of low-cost airline operators by placing the emphasis on maintaining the product back onto the original equipment manufacturers (OEM).

MAN Truck / Bus UK
Reported that the services it provided improved fuel consumption by at least 10%, and reduced CO2 emissions by 10-15%. Within the next 5 years the company will generate an extra £200million of business as a result of offering advanced services.

University of  Nottingham
Document management systems are about 70% greener as a result of a managed print services contract with Xerox.  In addition, these services have enabled structural change that was elusive for the customer previously.

“We put in a managed print service to take a million pounds off the cost of printing a year, and we did it.”
Jim Reed, director of procurement at University of Nottingham

Heart of England NHS Trust
The trust has partnered with a technology innovator in healthcare to deliver laboratory processes, and is currently bidding, alongside its services partner, to do work for other hospital laboratories. The partner has helped the trust to optimise existing processes and better use its equipment.

British Airways
Benefits from working closely with its service provider, as this enables the company to take advantage of the provider’s ongoing R&D, adopting improvements to work processes or digital workflows more quickly than would otherwise be possible. This has led to a 30% saving in reprographic costs.

By 2020, Half of Citizens Believe They Will Use Only One Transportation App and More Than a Quarter Will Use a Self-Driving Car 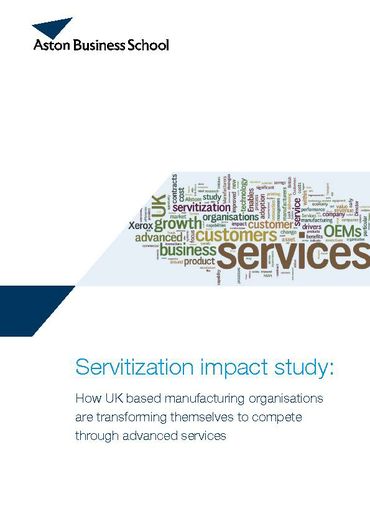 How U.K. based manufacturing organisations are transforming themselves to compete through services

How U.K. based manufacturing organisations are transforming themselves to compete through services 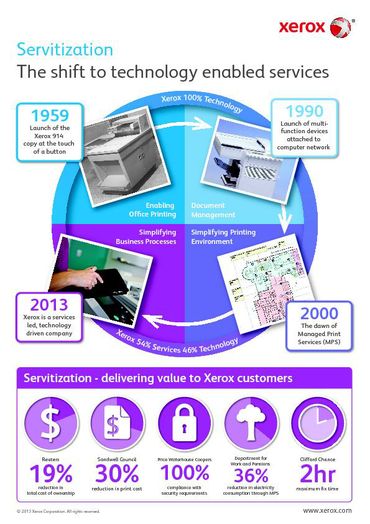 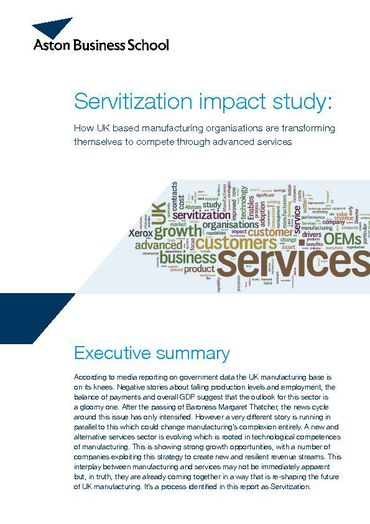