UXBRIDGE, U.K., Oct. 20, 2016 – More than 80 percent of small/mid-size businesses (SMBs) want to cut paper out of the way they invoice, report financials, manage legal and human resource forms and handle other time consuming processes, according to a Xerox survey.

The survey of more than 1,000 companies in the United States, United Kingdom, France and Germany shows respondents expect to make the change during the next 12 months.

Nearly half (46 percent) of respondents confirmed that a significant amount of time is wasted on paper-intensive processes and six out of 10 view this as having a major impact on their bottom line. SMBs in Germany (51 percent) and the United States (50 percent) cited they spend the most time, followed by the United Kingdom (43 percent) and France (37 percent).

As SMBs prepare to digitise their paper processes, most will turn to experts for recommendations since only one in five respondents are aware of existing paper-free solutions in the market. The study shows that 47 percent will go to an office equipment dealer, one in four will look to their IT reseller and 37 percent will turn to the product manufacturer.

“Change can be overwhelming for SMBs, but there are many ways to evolve in the right direction,” said John Corley, president, Channel Partner Operations, Xerox. “As SMBs embark on their digitisation journey, it’s important to understand how technology – such as apps on printers and managed print services – can support their vision and strategy to achieve successful digital transformation.”

The survey, conducted by independent market research firm Coleman Parkes Research, shows increasing productivity as a top priority, along with growth and reduced printing costs. Other findings include:

In addition to focusing on digitisation and automation, SMBs are also exploring other areas to improve productivity, including:

SMBs in the United States and Western Europe spend £32.5 billion annually on office equipment and related print services1. Helping these businesses improve their processes has been a major focus for Xerox. The company has introduced a variety of solutions to help SMBs automate processes, improve mobility and reduce printing costs through MPS. Xerox’s ConnectKey® technology automates manual paper-dependent processes and makes it easier for mobile users to collaborate and work more effectively, even outside of the office. It also leverages partnerships with Cisco and McAfee for a multi-layered approach to securing printers.

1,021 SMBs with annual revenue ranging from less than £5 million to more than £249 million took part in a detailed online survey completed in September 2016. The “2017 Office Productivity Trends to Improve the Bottom Line” survey was completed by independent third-party Coleman Parkes Research in the United Kingdom and commissioned by Xerox Corporation. Respondents were senior business managers in operations, finance and IT, along with small business owners. The SMBs taking part had between 50 and 1,000 employees, and were based in the United States, United Kingdom, France and Germany.

Xerox is helping change the way the world works. By applying our expertise in imaging, business process, analytics, automation and user-centric insights, we engineer the flow of work to provide greater productivity, efficiency and personalisation. Our employees create meaningful innovations and provide business process services, printing equipment, software and solutions that make a real difference for our clients and their customers in 180 countries. On January 29, 2016, Xerox announced its plans to separate into two independent, publicly traded companies – Xerox Corporation, which will be comprised of the company’s Document Technology and Document Outsourcing businesses, and Conduent Incorporated, a business process services company. Learn more at www.xerox.com.

Xerox® and Xerox and Design® are trademarks of Xerox in the United States and/or other countries.

Prices, features, specifications, capabilities, appearance and availability of Xerox products and services are subject to change without notice.

82% of Employees Expected to Return to the Office in 12-18 Months, Xerox Future of Work Survey Reveals 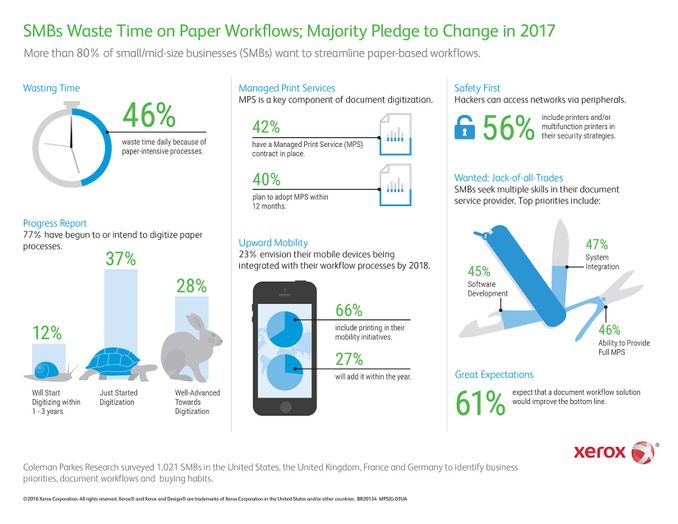 SMBs pledge to change in 2017. See what their key priorities are and what is driving their business decisions.

SMBs pledge to change in 2017. See what their key priorities are and what is driving their business decisions. 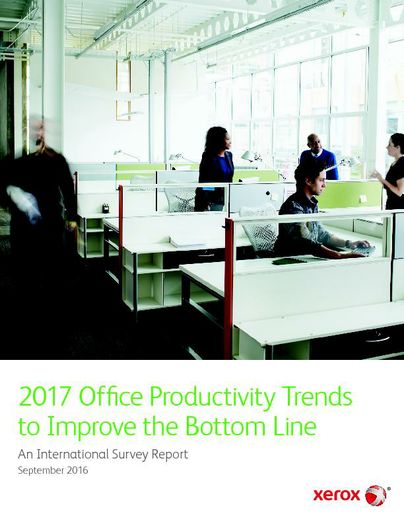